The Christians Brothers College Cork Past Pupils Union, which was founded in 1931, celebrates its 90th anniversary this year.

The inaugural meeting was held in the Physics Lab at the College on March 23rd 1931.It is on record that the large attendance was presided over by Rt. Rev. Dean Sexton, who was one of a group of the first pupils in the College when it was opened in 1888. Dr. Walter Rahilly became the first President of the Union and the quiet Br. J.X O'Hanlon, who was principal since 1928 and Dean Sexton were elected Vice Presidents.

Ninety years on, there are more than six hundred enrolled members, some of whom are domiciled in many parts of the world.

Functions and events are arranged at which the Alumni are afforded an opportunity to renew friendships onetime enjoyed with schoolmates in their Alma Mater. The aims of the Union also include that members proclaim their commitment to provide moral and financial support for worthy activities and projects in the College. Some funds raised may be appropriated to charity.

The Union is always seeking new members & can be contacted via the school website, Twitter (@CBCCork_PPU), Facebook, LinkedIn & via email (This email address is being protected from spambots. You need JavaScript enabled to view it.).
Christian Brothers' College PPU has played an integral part in the life of the College for over seventy years. Throughout its existence, the Union has been a tower of strength to the College. Since its formation in 1931, the ethos of the Union has always been its desire to support, encourage and indeed sponsor the work and life of the College. The Union has contributed to C.B.C. in ways that could not have been imagined by its founders. It has sponsored a host of co-curricular events and activities - from debates to sports days to golf outings.

At its first Annual General Meeting in 1931, the aims of the Union were "...to bring together its members, at least once a year, to renew friendships, to keep members in touch with the life and the progress of their school and undertake such activities as shall seem proper to members." 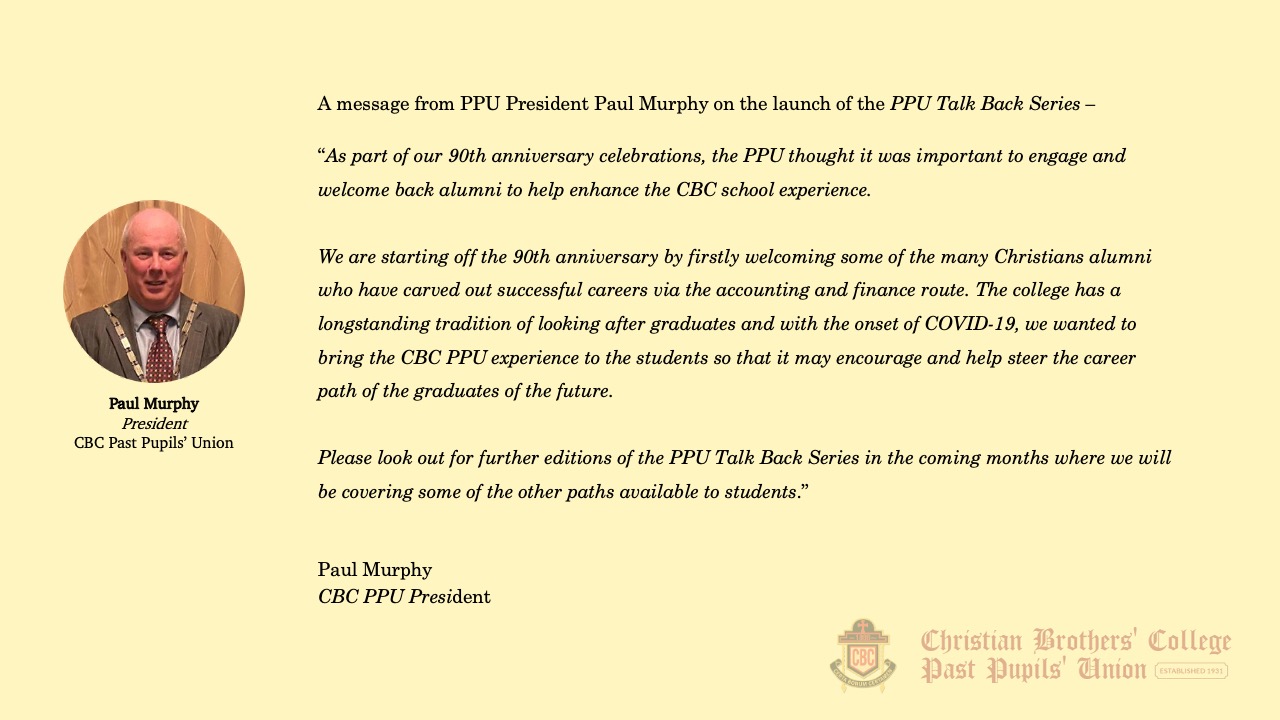 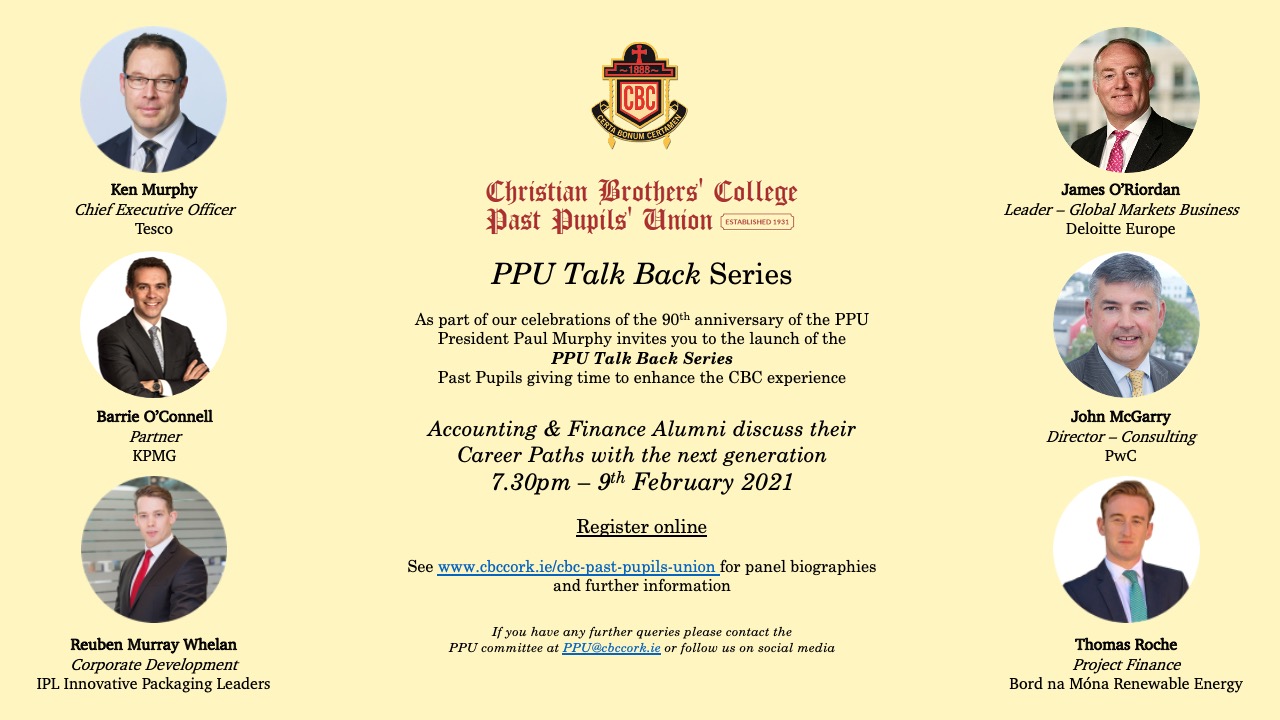 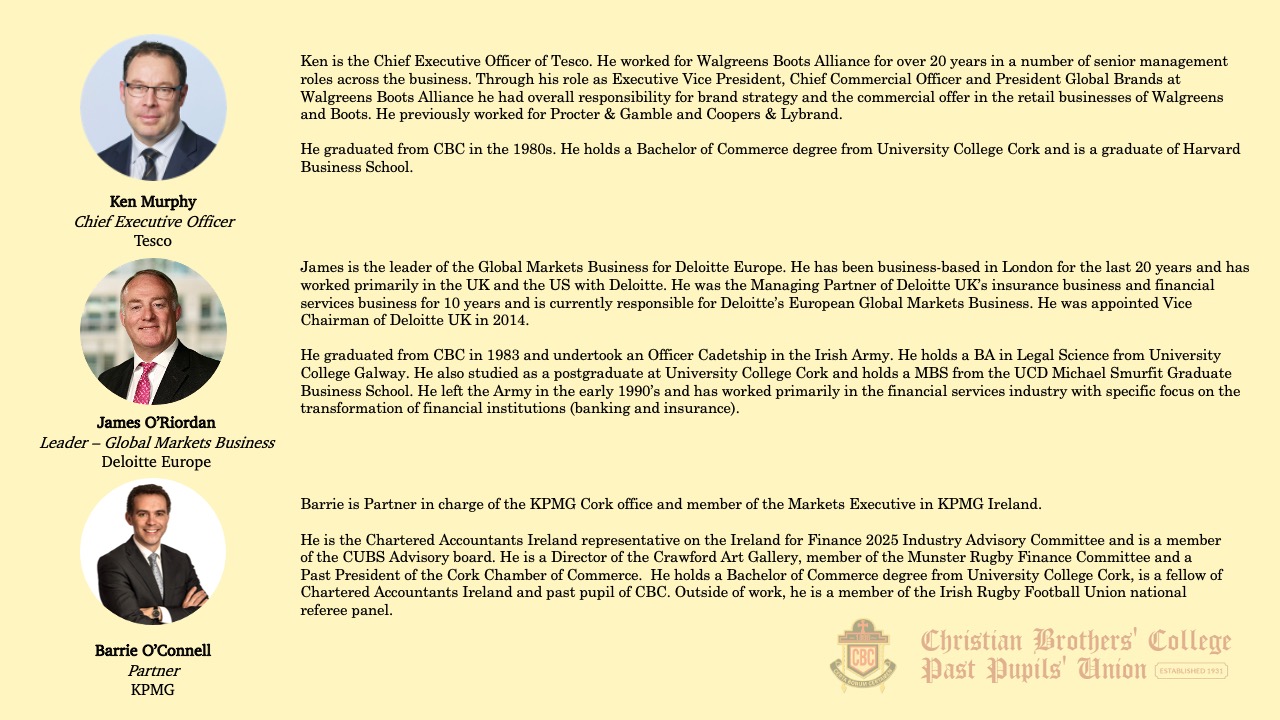 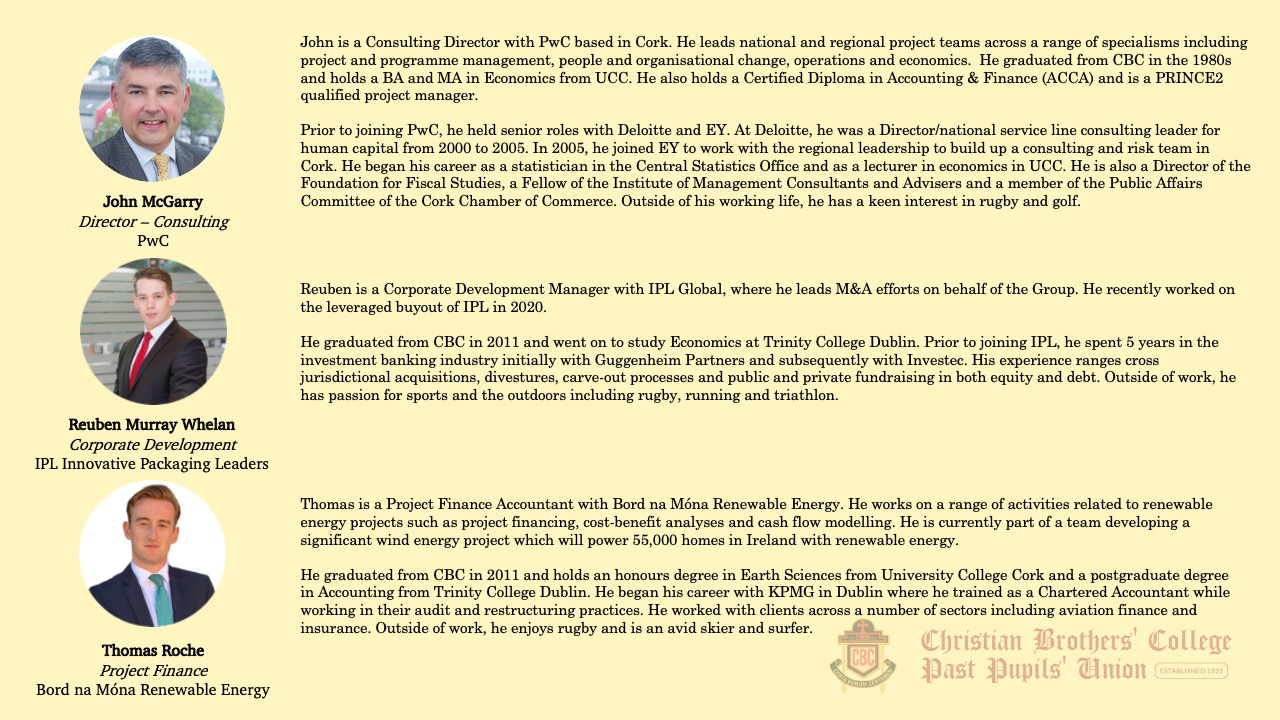 
The President of the PPU wishes to congratulate all the 2020 graduates on the great results at the school after such difficult few months. Best wishes to the boys and a big well done to all the teaching team at the school.

The President was delighted to attend for the school presentation by Principal David Lordon to 2020 Senior captain Finn Macfiannachadha and Cian Whooley.
Best wishes to both Finn and Cian and all the 2020 class year on their next career steps. 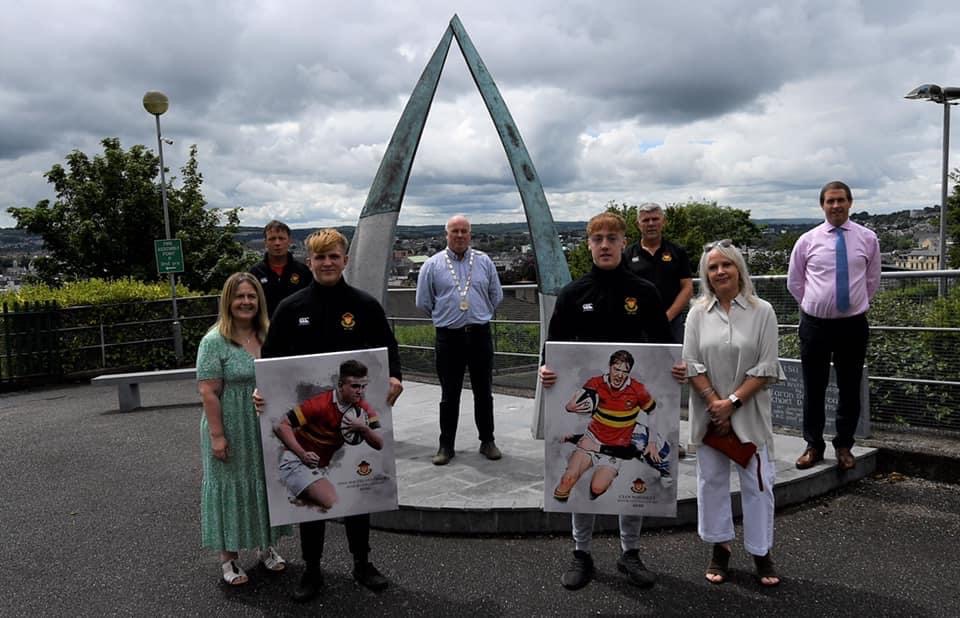 We are extremely proud that in 2021 the CBC PPU will be 90 years in existence. 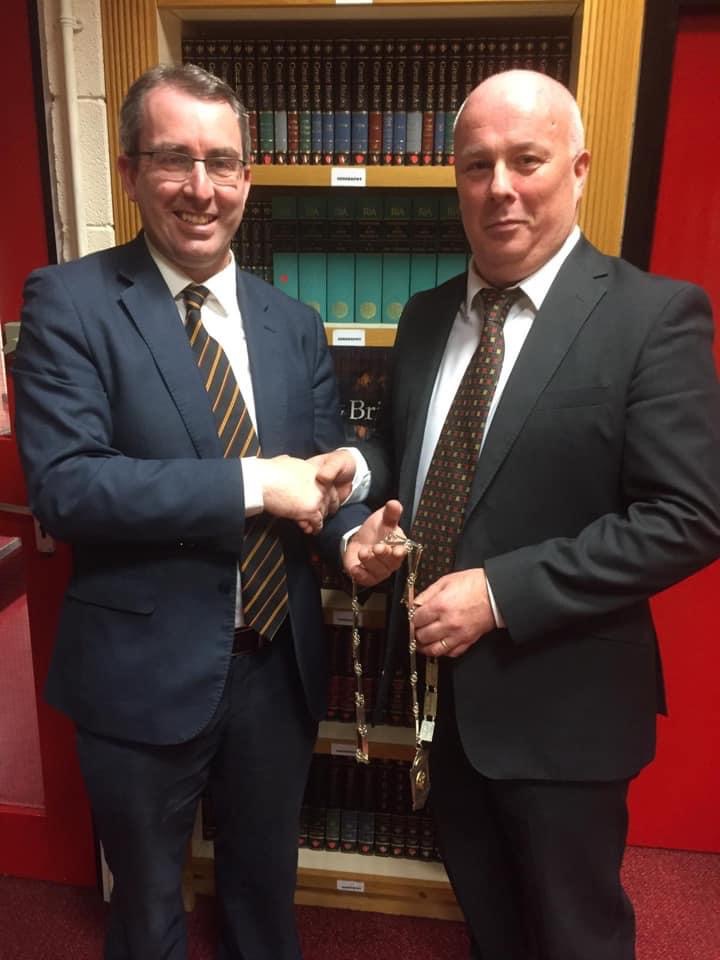 On the occasion of the annual Charity match between CBC and PBC attended by the usual lively crowd, Paul Murphy President of CBC PPU was delighted to make a PPU donation to L'Arche on behalf of the PPU.
We admire and compliment the significant activity by the local L'Arche community and we are very pleased to make this extremely worthwhile donation. 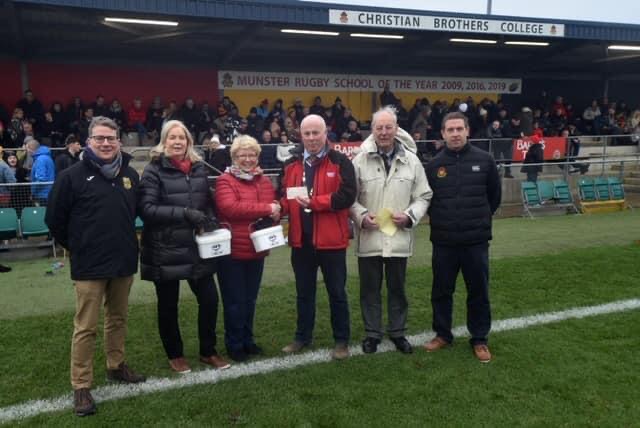 The President, on behalf of the PPU, was delighted to present a cheque to Ian Dunne (Director of Rugby) in support of Peter Melia and team on the occasion of the annual First Year rugby tour to Portugal. 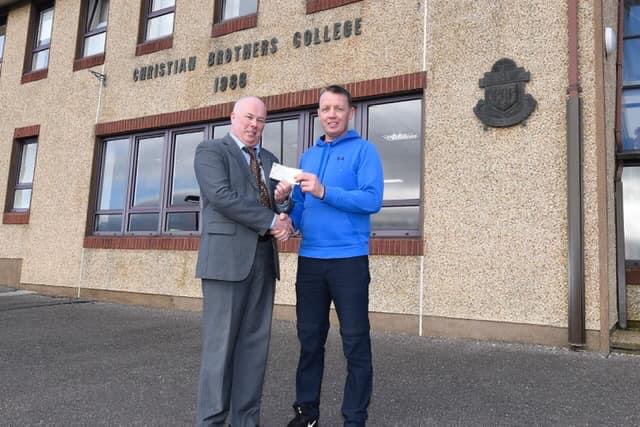 The President was delighted to be present at the school on Wednesday to make the annual donation to Senior Coach Tommy Crowe in supporting the Senior squad for 2020/2021. 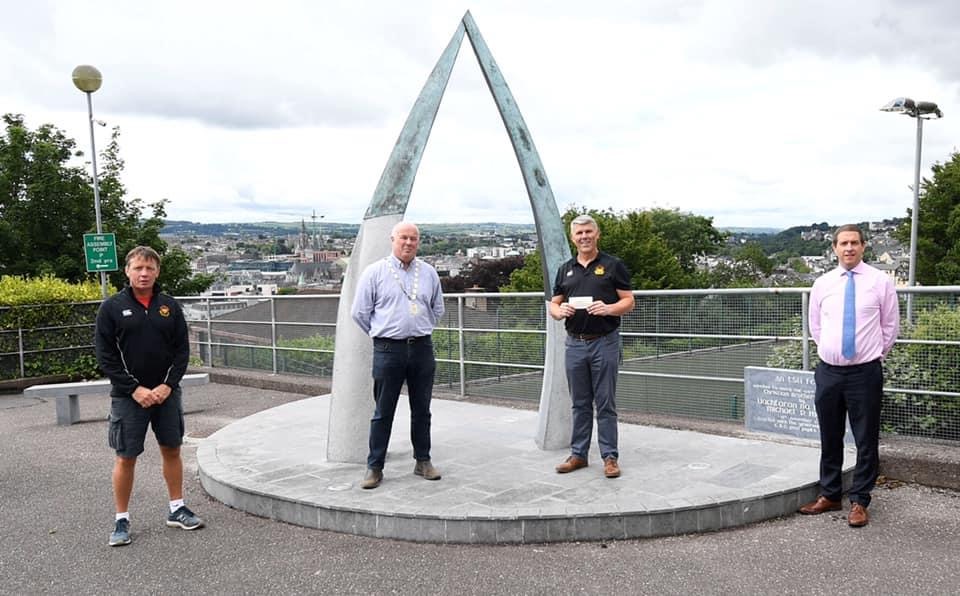 We exhort all members to consult the magnificent volume produced by the Union in 1989, entitled 'Christians: The First Hundred Years' (available in the College archives). Here you may read further on the history of the Union, the story of many illustrious past pupils of C.B.C. and the details of the work involved in planning the construction of the new schools. 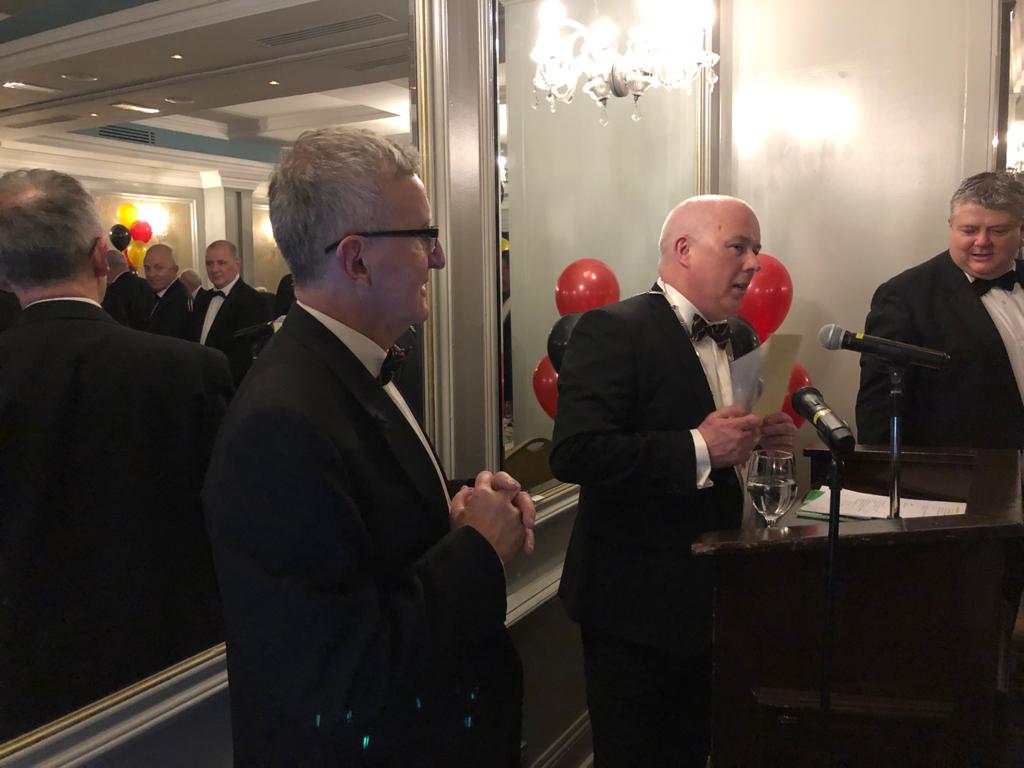 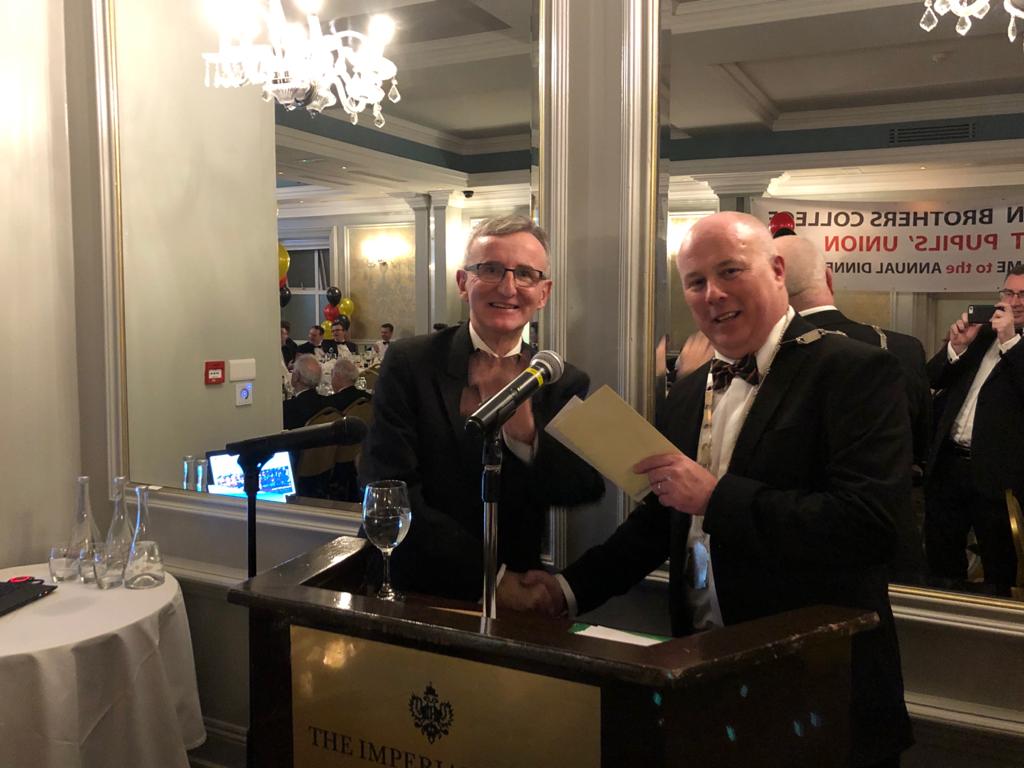 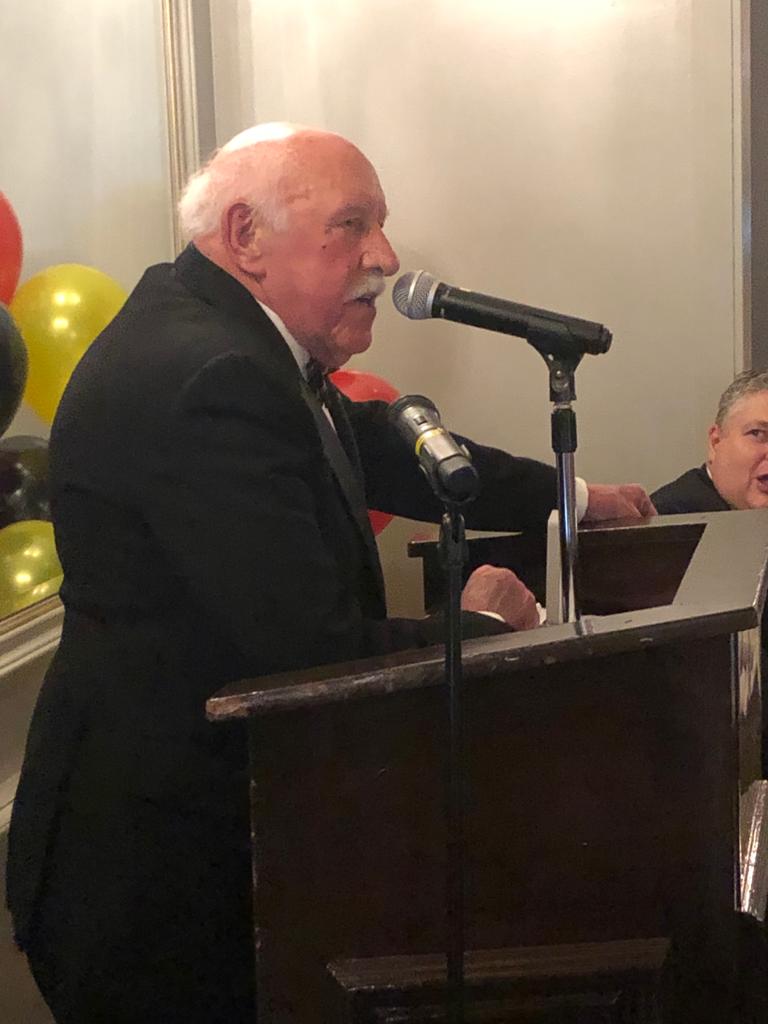